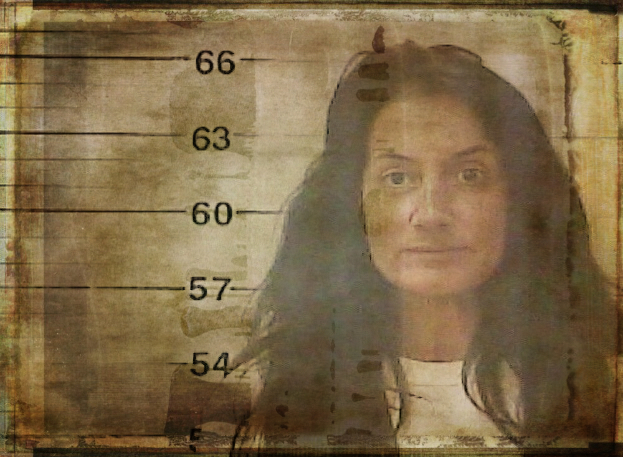 Sandra Grazzini-Rucki walked out of jail last October looking to pick a fight after she finished the first portion of her jail sentence for her role in the disappearance of her daughters.

I doubt anyone believed Grazzini-Rucki was going to be reformed after serving just over 30 days in jail.

But even I was surprised, when hours after being released from jail, I found Grazzini-Rucki standing by my car as I left the Dakota County Northern Service Center in West St. Paul. Grazzini-Rucki momentarily blocked my exit, as she stood behind my car as I attempted to back out of my parking spot. I stepped out of my car and asked her, “can I help you with something?” Grazzini-Rucki said no and she walked back to a waiting vehicle.

Since October, Grazzini-Rucki’s disdain for law enforcement and the court system has become more flagrant, her rhetoric more incendiary, and her behavior increasingly dangerous.

Grazzini-Rucki has started down a very dangerous road. She thrives off of chaos and the attention it brings. Not satisfied with the damage and pain she has already inflicted, Grazzini-Rucki is working to create more lawlessness in society.

Grazzini-Rucki’s quest for martyrdom and stardom

Grazzini-Rucki operated on the fringe of society long before she took her daughters near their home in Lakeville and later abandoned them on a ranch in northern Minnesota for over two years. After being convicted last July on six felony counts of deprivation of parental rights, Grazzini-Rucki has started a dangerous quest for martyrdom and stardom. 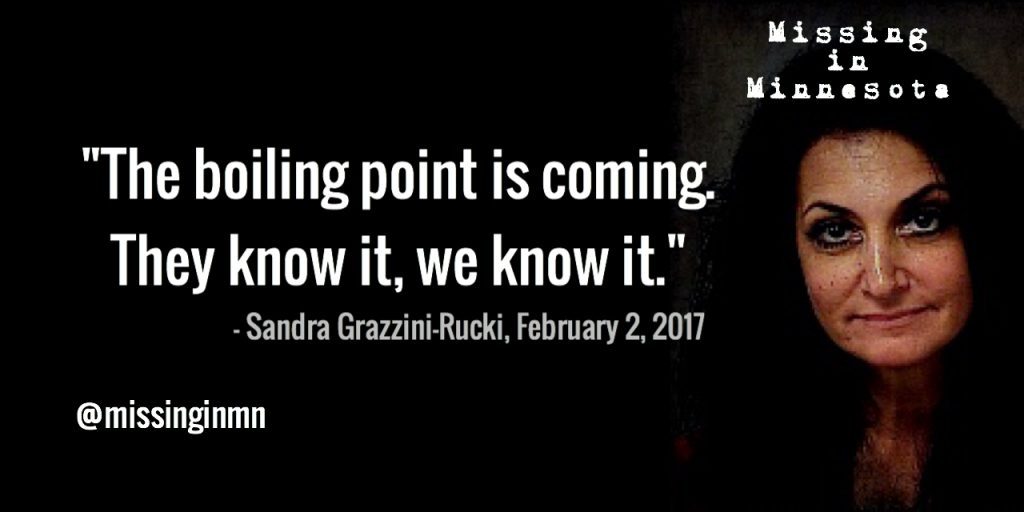 She has lost in family and criminal court. She has lost in the court of public opinion. Grazzini-Rucki needs to create an alternative world, one in-which she is persecuted and hunted.

The cult-like followers around Grazzini-Rucki have dwindled in recent years, mostly because Grazzini-Rucki’s criminal activity had been exposed. To assist in her recruitment efforts, Grazzini-Rucki uses her new world, which contains imaginary court battles and conflicts with judges and the judiciary.

In her desperation, Grazzini-Rucki has spent hours a week on various podcasts telling the “facts” of her story. Grazzini-Rucki has reinvented the “truth” surrounding her incarceration and she now presents herself as an expert on alleged court corruption.

In an interview earlier this month, Grazzini-Rucki alluded to a coming battle by saying, “the boiling point is coming. They know it, we know it.”  Days later, Grazzini-Rucki used even more forceful language when she said, “no, I will not go away and I’m coming at you even harder.”

As the record of documented lies continues to build, the statements and accusations from Grazzini-Rucki and her supporters have become more outrageous and untruthful.

So how does an admitted liar, without any concept of the truth or reality, communicate their story? By gaslighting.

“Gaslighting is a tactic in which a person or entity, in order to gain more power, makes a victim question their reality. It works much better than you may think. Anyone is susceptible to gaslighting, and it is a common technique of abusers, dictators, narcissists, and cult leaders. It is done slowly, so the victim doesn’t realize how much they’ve been brainwashed.”

Gaslighting is an antiquated term which has recently reemerged into our contemporary lexicon. We have seen “gaslighting” used as a social media hashtag, with more people becoming familiar with the concept.

The term came from the 1944 film staring Ingrid Bergman titled “Gaslight.” The premise of the film is that Bergman’s character is lead to believe she has gone crazy as her husband alters her reality.

Grazzini-Rucki is using this technique in an attempt to gain support. 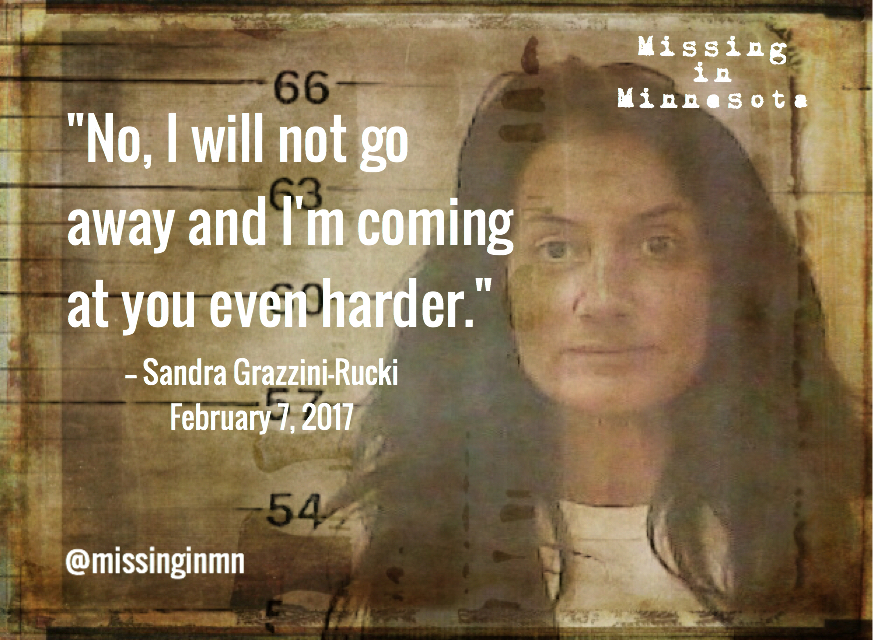 She has made outrageous claims which serve only to frighten parents in custody and divorce proceedings to perhaps convince them to do what she did. She is making these fanciful claims about the courts that are meant to diminish trust in the current system and lead people away from following the law.

During a recent podcast Grazzi-Rucki announced, “If you protect children from physical and sexual abuse in the state of Minnesota, this needs to be known, you will go to jail for protecting your own children.”

Weeks before, Grazzini-Rucki was interviewed on a different podcast and said, “what a fool I was to believe in the police and the court system.” She added, “don’t think it can’t happen to you.” In what could only be heard as a warning to others that if you chose to enter the system, you will not make it out without persecution.

In that same production Grazzini-Rucki stated, “divorce courts turn people into criminals, I have to say, if you weren’t one before, you sure learn how corrupt and abusive the system is now.”

Before Grazzini-Rucki left jail last October, her criminal defense attorney, Stephen Grigsby, issued a blunt warning to the public that Grazzini-Rucki had “no intentions to comply with probation.”

Days after making his statements about Grazzini-Rucki, Grigsby was granted his request to be released from serving as Grazzini-Rucki’s criminal defense attorney.

Just over a week after being released from jail last October, a warrant was issued for the arrest of Grazzini-Rucki.

According to court documents, the warrant was issued because Grazzini-Rucki failed to “maintain contact with probation” and she failed “to notify probation within 72 hours of any change in address, employment, and phone number.”

But Grazzini-Rucki physically refused to allow a GPS monitor to be attached to her leg and she would not provide DCCC with her residential address.

A second warrant was issued for Grazzini-Rucki’s arrest and another series of court hearings were held to determine how to enforce the conditions of Grazzini-Rucki’s probation. The court determined that Grazzini-Rucki had violated her probation multiple times since being released from jail last October.

Grazzini-Rucki was placed on “court-supervised probation” because she repeatedly refused to provide DCCC with a verifiable address and she would not comply with GPS monitoring. She was released from jail again last November.

Grazzini-Rucki was intentionally violating her probation in an attempt to bypass the court’s decision to prohibit her from executing her complete sentence. She wants to serve her full sentence in prison, thereby avoiding being on probation for the next six years. Grazzini-Rucki made her first request to execute her sentence within hours of her sentencing hearing on September 21, 2016. 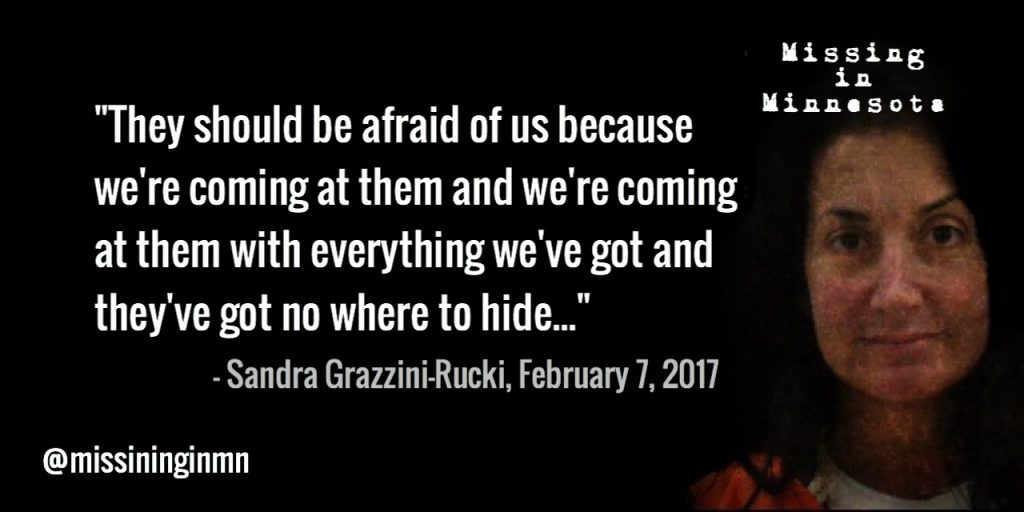 Since being released from jail on October 24, two warrants were issued for Grazzini-Rucki’s arrest, forcing numerous court hearings, which ultimately reduce the number of days she has remaining on her sentence.

Grazzini-Rucki took to the airwaves in December to boast in a radio interview that she had violated court orders by communicating with additional people who were criminally charged related to the disappearance of her two daughters.

Judge Karen Asphaug, who presided over Grazzini-Rucki’s criminal case, and had the same role in the criminal proceedings of Dede Evavold, along with Doug and Gina Dahlen, issued court orders which prohibited any contact between Grazzini-Rucki, Evavold, and the Dahlens.

Grazzini-Rucki admitted in December that she had recently spoken with the Dahlens in violation of the court’s order. She also acknowledged speaking with Evavold.

Despite the specific instructions from the court prohibiting communications, evidence collected over the last few months show Evavold and Grazzini-Rucki have remained in contact.

Grazzini-Rucki’s statements in recent interviews and podcasts make direct references to coming conflicts with the enemies she has constructed in her alternative world. She isn’t even coy about it.

Since being released from jail, there is no evidence that Grazzini-Rucki is working. Based on her media interviews, Grazzini-Rucki’s current mission is dedicated to retelling the same old stories about her battles in court, or she is creating new fictitious tales.

Questions have been repeatedly raised in the past about Grazzini-Rucki’s mental health. Based on her recent statements and behavior, the unanswered questions about her mental health provide an uneasy picture into the mind of Grazzini-Rucki.