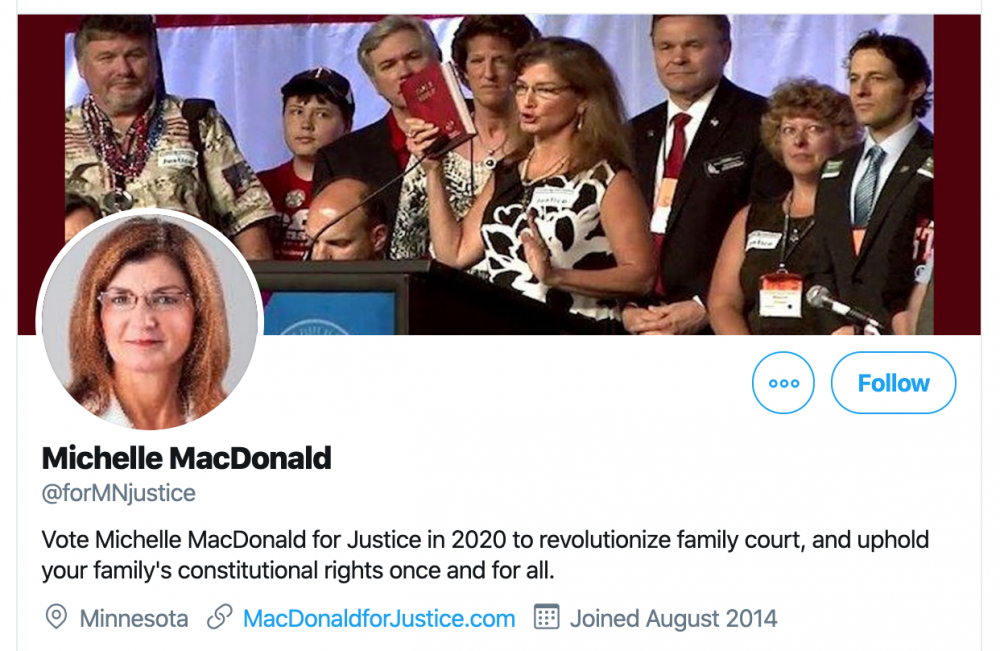 UPDATE (4:04 PM, Friday, December 13, 2019) – This story has been updated to include confirmation from Justice Paul Thissen’s campaign that he will stand for election to the Minnesota Supreme Court in 2020.

Michelle MacDonald launched her candidacy today for the Minnesota Supreme Court in 2020, just hours after her attorney argued in court that she wasn’t a public figure because she wasn’t a candidate for public office.

During oral arguments at the Minnesota Court of Appeals MacDonald’s attorney, Karlowba R. Adams Powell, told the three judges who were hearing MacDonald’s appeal that since MacDonald was not a candidate for office, she was not a public figure.

But within hours after the hearing ended, MacDonald’s Twitter profile was updated to encourage people to “Vote for Michelle MacDonald for Justice in 2020…”

UPDATE: During today’s oral arguments, Michelle MacDonald’s attorney argued she was a public figure and wasn’t running for office. In the time since the hearing ended at 10:45 AM, MacDonald’s Twitter profile was updated to reflect she is running for the MN Supreme Court in 2020. pic.twitter.com/xPmhJVlqg0

Today’s activity by MacDonald on social media is the first public campaigning she has specifically done for her fourth campaign for the Minnesota Supreme Court since announcing in July through an unrelated lawsuit that she planned to run for office “in 2020 and in the future.”

MacDonald being investigated by lawyers board because of her lawsuit

The over 16-month investigation into the alleged violations by MacDonald was opened after Missing in Minnesota filed a formal complaint with the Office of Lawyers Professional Responsibility weeks after MacDonald filed a “frivolous and vexatious” lawsuit against Missing in Minnesota, which appears to be in violation of an Order of the Minnesota Supreme Court which details the conditions by which MacDonald is allowed to practice law.

The Eagan Police Department investigated MacDonald’s claims and found them unfounded. The report states: “the photo turned out to be a valid public booking photo.” In fact on October 20, 2016, MacDonald testified under oath at her own deposition and acknowledged the existence of the booking photo that she falsely claimed to police Brodkorb created