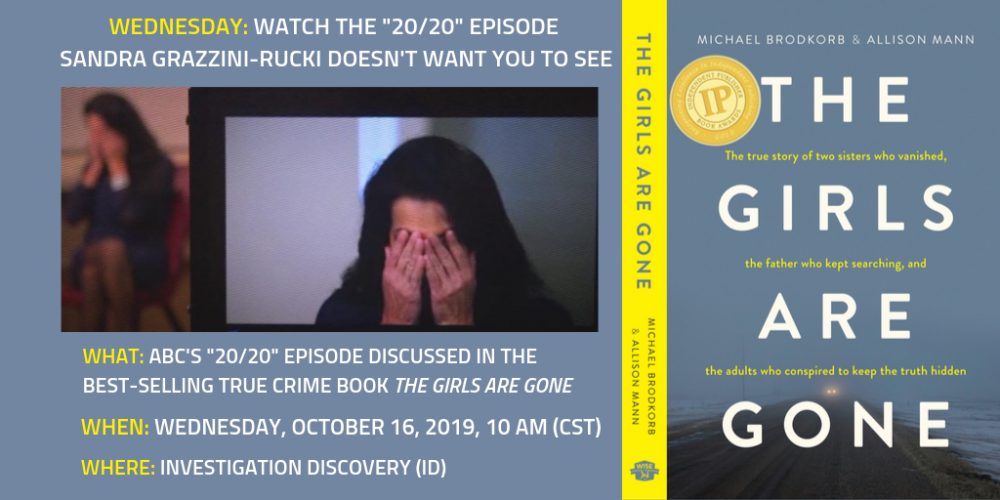 Tomorrow, October 16, 2019, at 10 AM (CST), Investigative Discovery (ID) will be broadcasting the episode of ABC’s “20/20” discussed in the award-winning true crime book,  The Girls Are Gone.

Grazzini-Rucki’s appearance on “20/20” is discussed along with her involvement in the disappearance of her daughters Samantha and Gianna Rucki is examined in the award-winning true crime book, The Girls Are Gone.

Since being released  The Girls Are Gone has been a commercial and critical success. In April, Brodkorb and Allison Mann were awarded a 2019 Independent Publisher Book Award. Brodkorb and Mann announced the fourth printing of their book had been ordered earlier this year.

Last week, Brodkorb and Mann announced that the audiobook is available for sale. The audiobook not only shares the story of the disappearance of Samantha and Gianna Rucki but also includes a rare gem in the audiobook universe: never-before-heard audio.

Brodkorb and Mann have appeared at nearly 40 events for their book in the last few months, and more book events will be announced later this week.