In the news: 'In-depth story of Rucki family hits bookshelves' 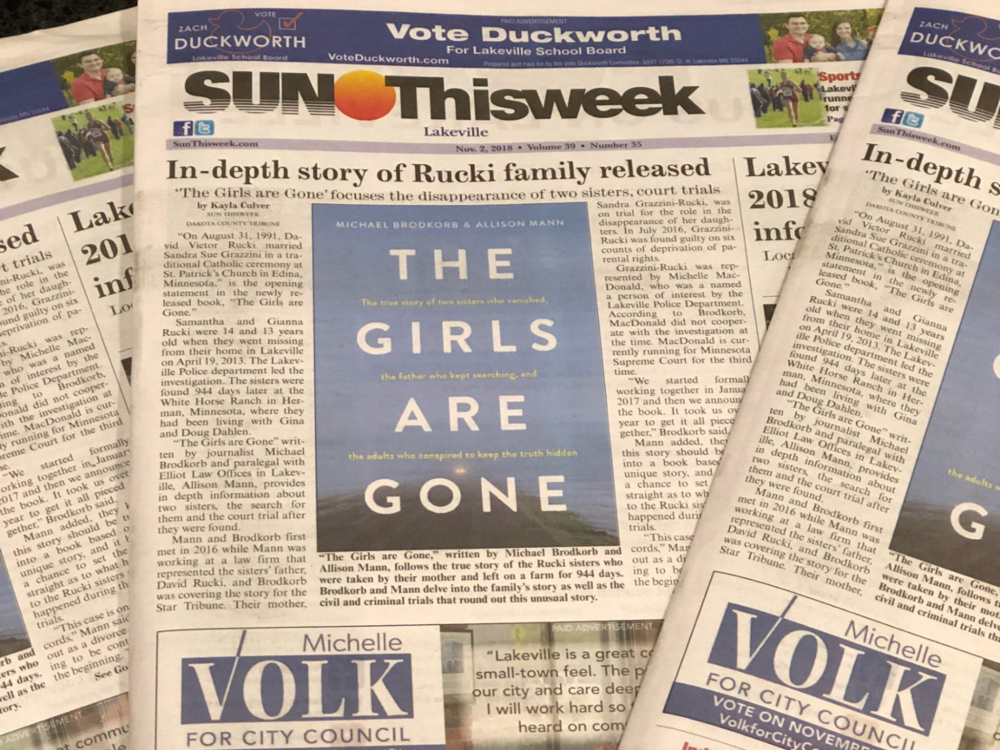 Please read the story below from the Lakeville Sun This Week about the release of our new book The Girls Are Gone. As noted in the story, we’ll be signing books at the Chart House’s Sip N Shop Local tomorrow from 12-6 p.m. in Lakeville, Minnesota.

“On August 31, 1991, David Victor Rucki married Sandra Sue Grazzini in a traditional Catholic ceremony at St. Patrick’s Church in Edina, Minnesota,” is the opening statement in the newly released book, “The Girls are Gone.”

Samantha and Gianna Rucki were 14 and 13 years old when they went missing from their home in Lakeville on April 19, 2013. The Lakeville Police department led the investigation. The sisters were found 944 days later at the White Horse Ranch in Herman, Minnesota, where they had been living with Gina and Doug Dahlen.

“The Girls are Gone” written by journalist Michael Brodkorb and paralegal with Elliot Law Offices in Lakeville, Allison Mann, provides in depth information about two sisters, the search for them and the court trial after they were found.

Mann and Brodkorb first met in 2016 while Mann was working at a law firm that represented the sisters’ father, David Rucki, and Brodkorb was covering the story for the Star Tribune. Their mother, Sandra Grazzini-Rucki, was on trial for the role in the disappearance of her daughters. In July 2016, Grazzini-Rucki was found guilty on six counts of deprivation of parental rights.

Grazzini-Rucki was represented by Michelle MacDonald, who was a named a person of interest by the Lakeville Police Department. According to Brodkorb, MacDonald did not cooperate with the investigation at the time. MacDonald is currently running for Minnesota Supreme Court for the third time.

“We started formally working together in January 2017 and then we announced the book. It took us over a year to get it all pieced together,” Brodkorb said.

Mann added, they knew this story should be turned into a book based on the unique story, and it became a chance to set the record straight as to what happened to the Rucki sisters and what happened during the criminal trials.

Click here to read the full story from the Lakeville Sun This Week.