The Minnesota Supreme Court has suspended Michelle MacDonald’s law license for a minimum of 60 days, and she will be on supervised probation in response to an attorney complaint filed against MacDonald in August 2016.

A judicial referee appointed by the Minnesota Supreme Court recommended last year that MacDonald’s law license be suspended for a minimum of 60 days, followed by two years of probation, which would include a mental health evaluation.

But the final order from the Minnesota Supreme Court did not include a mental health evaluation which triggered Associate Justice Anne McKeig to dissent in part from the court’s decision.

The conditions of MacDonald’s two-year probation include that her probation will be supervised by an attorney appointed by the Director of the Office of Lawyers Professional Responsibility.

MacDonald is prohibited from engaging in “the solo practice of law” and she must “work in a setting where she is in daily contact with, and under the direct supervision of another Minnesota licensed attorney.”

The order from the Minnesota Supreme court states that the “attorney who directly supervises [MacDonald’s] work must co-sign all pleadings, briefs, and other court documents that respondent files. This attorney may not be an associate who works for respondent’s law firm. Any attorney or law firm with whom she practices shall be informed of the terms of this probation.”

MacDonald did not respond to a request for comment on the order from the Minnesota Supreme Court.

According to the order from the Minnesota Supreme Court:

A 60-day suspension, followed by 2 years of supervised probation, is the appropriate discipline for an attorney who failed to competently represent a client; made false statements about the integrity of a judge with reckless disregard for the truth; improperly used subpoenas; knowingly disobeyed a court rule and failed to follow a scheduling order; and engaged in disruptive courtroom conduct, including behavior resulting in her arrest.

MacDonald was arrested during a court hearing in September 2013 while serving as Grazzini-Rucki’s family court attorney.

Associate Justice Anne McKeig concluded her partial dissent from the court’s decision with a strong rebuke of MacDonald: 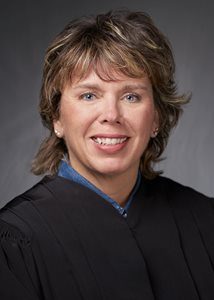 Today, the court hesitates to impose sufficient discipline, and it does so at the expense of protecting the public. Although MacDonald portrays herself as a victim, the true victim in all of this is the public. I respectfully disagree with the court’s decision to suspend MacDonald for a mere 60 days and its reluctance to require a mental-health evaluation. Our duty to the public demands more of us, and more of respondent. I conclude that a 6-month suspension, including a petition for reinstatement, and a 2-year probation term, including a mental-health evaluation, is warranted. On these grounds, I respectfully dissent.

Below is the full order from the Minnesota Supreme Court regarding MacDonald.