MacDonald ran against Chutich because she is gay - Missing in Minnesota

MacDonald’s candidacy hasn’t generated many positive headlines, but in a story published today by the Star Tribune, MacDonald discloses one of her bigoted reasons for challenging Chutich:

In a recent interview, MacDonald singled out Chutich’s sexuality as helping her decide who to challenge in this year’s election. Three other members of the court are on the ballot this year but are unopposed. “It factored in, but it wasn’t the only reason,” MacDonald said. “ … When that came to me, that piece, I’m just like, ‘Yep, that’s the one.’ ”

MacDonald said she views Chutich’s marital status as her right but cast it as a “liberal view” counter to MacDonald’s conservative philosophy.

“Spiritually, the reason why you connect with somebody is to procreate, basically,” MacDonald said. “And I’m pro-life. You can certainly publish that. I’m not afraid to be pro-life.”

MacDonald’s bigoted reason for running against Chutich is not the only controversial comments she made in recent weeks.

In an interview on WCCO Radio earlier this month, MacDonald said she does not believe Sandra Grazzini-Rucki committed a crime when she abducted her children during a custody dispute with her ex-husband. MacDonald said the crime involving the disappearance of Samatha and Gianna Rucki was committed by Judge David Knutson when he issued a court order involving custody in 2012. 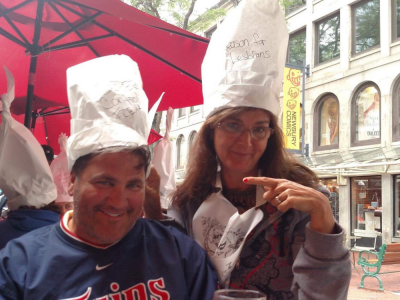 While MacDonald has a long record of making irresponsible and false statements against judges, her shocking comments about Chutich expose overlooked bigotry. In 2016, MacDonald posted a picture on her Facebook page of her wearing a paper hat with the words “Reason for Lesbians” at a restaurant.