Law enforcement in Dakota County is currently investigating numerous threatening, harassing, and defamatory statements which have been published on social media accounts connected to Sandra Grazzini-Rucki and her supporters.

A collection of social media accounts on Twitter and Facebook have targeted judges, law enforcement, court staff, and journalists, including members of their families.

David Rucki and members of his family continue to be targeted by multiple social media accounts, which has lasted for years.

Missing in Minnesota is not publishing the name of the suspected social media accounts, nor will the content contained in the posts be published at this time. 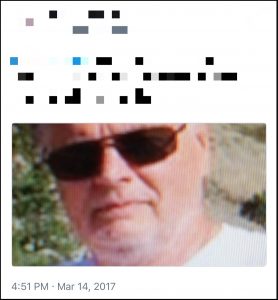 Ed Straight, a neighbor of David Rucki and his family in Lakeville, was also targeted in a series of harassing tweets sent in March.

In an interview with Missing in Minnesota, Straight believes he was targeted for harassment because he attended Grazzini-Rucki’s criminal trial and is a friend of David Rucki.

Straight confirmed he spoke with the Dakota County Sheriff’s Office about the tweets, and communicated his belief to law enforcement that Grazzini-Rucki herself was likely the author of the statements which targeted Straight.

A representative of the Dakota County Sheriff’s Office declined to comment, citing an ongoing investigation into the social media accounts connected to Grazzini-Rucki and her supporters.

Grazzini-Rucki announced she would target children, spouses, and family members

Grazzini-Rucki, who is currently on probation for her role in the disappearance of her children, announced in March that she and others would be targeting the family members of judges, attorneys, and county staff, including their children. The timing of Grazzini-Rucki’s announcement coincided with many of the most concerning statements which were published by the social media accounts currently being investigated.

The alarming comment from Grazzini-Rucki were made during her podcast, which she hosted with a man convicted of threatening to shoot a judge.

In an angry tirade, Grazzini-Rucki said on her podcast:

Evavold continues to use social media to target Rucki family

Dede Evavold, who was released from jail in January after being found guilty for her role in the disappearance of Samantha and Gianna Rucki from Lakeville, continues to target the Rucki in her use of social media – a violation of the conditions of her probation.

Evavold was charged in December 2015 related to her involvement in the disappearance of the Rucki sisters, who were taken by their mother near their home on the night of April 19, 2013.

She was convicted in September on six felony counts of deprivation of parental rights related to the disappearance of the girls.

At her sentencing hearing on November 10, 2016, Judge Karen Asphaug instructed Evavold that she was forbidden from making references to the Rucki family on social media for the length of her probation – eight years.

Despite the clear instructions from the court, Evavold continues to make references to the Rucki family, including a recent post which contained a picture of the Rucki’s home.