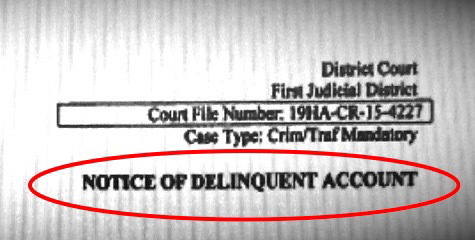 Dede Evavold has yet to pay any of the restitution, fines, and fees assessed by Dakota County after she was convicted last year for her role in the disappearance of two sisters from Lakeville.

Evavold was charged in December 2015 related to her involvement in the disappearance of Samantha and Gianna Rucki. The sisters were taken by their mother near their home on the night of April 19, 2013, during a custody and divorce dispute involving their parents – Sandra Grazzini-Rucki and David Rucki.

She was convicted in September on six felony counts of deprivation of parental rights related to the disappearance of the girls.

A “NOTICE OF DELINQUENT ACCOUNT” was filed with Dakota County and mailed to Evavold. According to the notice, Evavold is past due for making a payment of $12,317.

She must also pay two fines of $944, which represents the 944 days the Rucki sisters were missing.

The letter was dated January 31, 2017, and Evavold has 10 days to pay $12,317, or “the Court will take further action.” The letter describes actions the court may take, which includes suspending Evavold’s driver’s license and also issuing a warrant for Evavold’s arrest.  The notice from the court says “any other available sanctions will be imposed” against Evavold if she fails to make a payment.

On November 18, 2015 – 944 days after they disappeared – the Rucki sisters were found living on a rural ranch in northern Minnesota by law enforcement, headed by the Lakeville Police Department.

The ranch is owned by Douglas Dahlen and his wife, Gina Dahlen, who were also criminally charged related to the disappearance of the girls.

In January, the Dahlens each pleaded guilty to one count of deprivation of parental rights for their role in the disappearance of two sisters from Lakeville, Minnesota.

Evavold’s sister wrote a letter to Judge Asphaug claiming that Evavold has an “undiagnosed mental illness.”

Days after Evavold was released from jail last week, she wrote a bizarre post which mentioned the Rucki family on social media.  The post is likely a violation of her probation.

In a bizarre blog post written by Evavold and published Sundat, titled “BACK FROM THE BIG HOUSE”, Evavold mentioned the Rucki family in her post. Evavold also boasted about her time in jail, and discussed advice she received from Grazzini-Rucki’s family court attorney, Michelle MacDonald.

UPDATE: On Thursday, Dede Evavold made a $250 payment toward the over $12,000 in restitution, fines, and fees assessed by Dakota County related to her conviction.