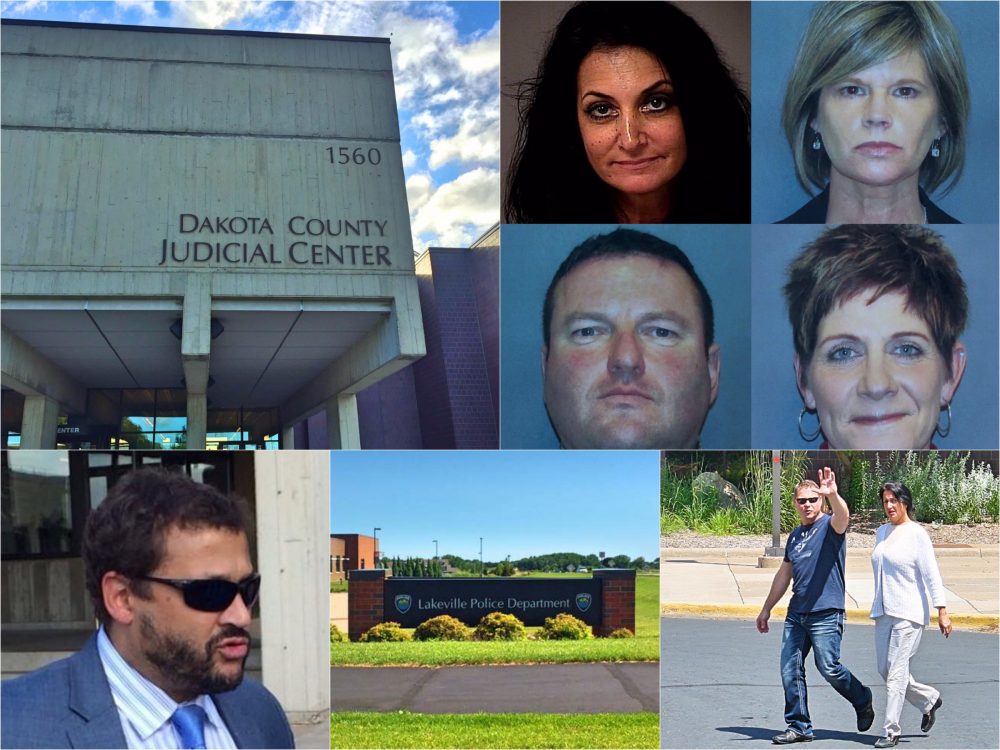 I am taking detailed notes of every legal development, along with documenting the atmosphere in the courtroom and the behavior of the key participants. The current estimate from the judge is that the jury will begin deliberating on the facts of the case on Tuesday.

This case is about the disappearance of two sisters, Samantha and Gianna Rucki, who ran from their home during a custody dispute and divorce proceeding involving their parents, Sandra Grazzini-Rucki and David Rucki.

David Rucki was awarded full custody of all five of his children in November 2013, while two of his daughters remained missing. On November 18, 2015 – 944 days after they disappeared – the girls were found living on a ranch in northern Minnesota by law enforcement, headed by the Lakeville Police Department.

The girls’ mother, Sandra Grazzini-Rucki, had been charged with eight felonies related to their disappearance, but yesterday two charges were dismissed against Grazzini-Rucki. The trial will focus on the six remaining felony criminal charges she faces for deprivation of parental rights involving the disappearance of Samantha and Gianna Rucki.

Sandra Grazzini-Rucki’s attorney, Stephen Grigsby, seems more interested in re-litigating the custody and divorce proceeding between Grazzini-Rucki and David Rucki than he is in providing evidence to establish Grazzini-Rucki’s affirmative defense to the criminal charges.

Judge Karen Asphaug told Grigsby that Grazzini-Rucki’s criminal trial “is not a process to collaterally attack the custody proceeding.”

Grigsby’s performance in the courtroom and the Dakota County Judicial Center in Hastings has been filled with dramatics.

On the first day, Grigsby was heard yelling and swearing at Grazzini-Rucki during a break in the trial.

On the start of the second day of the trial, Grigsby did not come to court with printed copies of court documents the attorneys would be discussing that morning.  After Grigsby said he did not have “copies with [him],” a visibly stunned Judge Asphaug asked Assistant Dakota County Attorney Kathryn Keena to share her documents with Grigsby. Keena then moved her seat closer to Grigsby, who later switched places with a student certified-attorney who is assisting Grigsby during the trial.

Grigsby then moved a chair close to Keena, and they both used Keena’s paperwork to discuss the admissibility of the court documents with the judge.

During the recess, Grigsby was heard boasting in a loud voice in the hallway he has “asked for many mistrials – none have been granted.”

During the first days of the trial, it was disclosed that Grigsby had issued subpoenas to compel the testimony of Samantha and Gianna Rucki – who the judge described as “children.

Lisa Elliott, who serves as the attorney for David Rucki and Samantha Rucki, appeared in court to argue the subpoenas had not been adequately served on either girl. More importantly, Elliott added that making the girls testify in open court would cause the children to experience additional trauma. The girls would be seeing their mother for the first time in over three years said Elliott and the spectacle of testifying in front of the public and strangers was inhumane.

Grigsby, who was seen smirking when the judge said the subpoenas were properly served on the children, offered a cold and unemotional response: “I don’t know if it’s within the scope of my mandate to be concerned about anything other than the verdict.”

An agreement was later reached between the attorneys that Gianna Rucki would not testify, but Samantha Rucki would be required to testify in the trial.

To lessen the trauma Samantha Rucki would endure by having to testify in her mother’s criminal trial, her testimony was taken in a small conference room and was live-streamed into the courtroom for the jury.

Samantha Rucki arrived at the courthouse in Hastings before 1 PM yesterday and was in a conference room on the second floor as she waited for her attorney, Pat Elliott to arrive.

Grigsby then called Sandra Grazzini-Rucki to testify in her defense at her criminal trial. Her testimony started at approximately 3:30 PM and ended roughly 45 minutes later. Her testimony will resume when the trial begins on Monday morning.

Sandra Grazzini-Rucki’s problem with the truth

The defendant – Sandra Grazzini-Rucki – is not required to testify in her criminal trial. It is the responsibility of the Dakota County Attorney’s Office to prove beyond a reasonable doubt that Grazzin-Rucki is guilty of crimes for which she has been charged.

Grazzini-Rucki does not dispute the basic facts of the case that she was involved in the disappearance of her daughters. Grazzini-Rucki is claiming an affirmative defense: she “believed the action taken was necessary to protect the child from physical or sexual assault or substantial emotional harm.”

In an interview with the Lakeville Police Department on June 30, 2016, Samantha Rucki told police that her father was not abusive to her, nor did David’s daughter witness her father be abusive to any of her siblings. Samantha repeated this during her testimony yesterday.

Grazzini-Rucki has huge credibility issues and has a documented record of lying under oath in court. I expect her testimony on Monday to be filled with the same unfounded accusations that caused her testimony yesterday afternoon to be confusing and utterly not believable.

Grazzini-Rucki, a former Mrs. Minnesota contestant, has been dressed differently in her criminal trial than she has in previous court appearances. Known for wearing designer clothes, Grazzini-Rucki has instead worn a series of very bland outfits, including what appeared to be a male plaid button-down short sleeve dress shirt and khaki pants in court yesterday.

Grazzini-Rucki’s criminal trial is scheduled to resume on Monday with her taking the stand to keep testifying. Additional witnesses may be called, but the expectation is that the jury will begin deliberating on Tuesday.