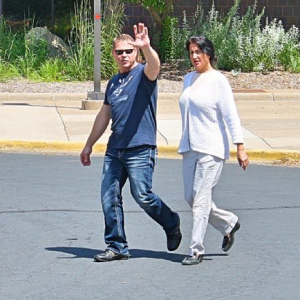 Since Grazzini-Rucki arrest on October 18, 2015, Rhedin has attended many of Grazzini-Rucki’s appearances in both family and criminal court.

In 2014, Rhedin pleaded guilty to bringing a firearm into an elementary school in Lakeville, Minnesota. Rhedin entered the school to serve a subpoena issued by Grazzini-Rucki’s attorney, Michelle MacDonald, for school records.

According to Dale Nathan, Rhedin was involved in the disappearance of Samantha and Gianna Rucki.

Nathan told the Star Tribune he was with Grazzini-Rucki in her car with Samantha and Gianna on April 19, 2013, when the girls ran from their home in Lakeville. Nathan said after driving around for hours with Grazzini-Rucki and her daughters on the night the two sisters disappeared, Grazzini-Rucki dropped him off at a truck stop in Northfield.

Nathan said he was later picked up by Rhedin and then driven to his car in Burnsville.

Nathan also said it was “highly likely” that Grazzini-Rucki drove a vehicle owned by Rhedin when she picked up her two daughters after they ran from their home in Lakeville on April 19, 2013.